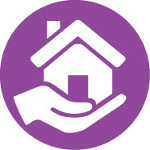 Congress established the Neighborhood Stabilization Program (NSP) in 2008 to address the record number of home foreclosures that occurred across the nation following the housing market crash.  Title III of the Housing and Economic Recovery Act (HERA) provided $2,466,039 in NSP funds to the City of Avondale for the redevelopment of foreclosed homes in particularly hard hit neighborhoods.  In 2010, the City received an additional $1,224,903 in NSP funds through a third round of funding provided through the Wall Street Reform and Consumer Protection Act (the Dodd-Frank Act).  These funds were used for additional redevelopment opportunities in sections of the City heavily impacted by the housing crash.


In order to receive these funds, the City modified its 2008-2009 Annual Action Plan,  To indicate to the US Department of Housing and Urban Development how NSP funds would be spent, the 2010-2011 Annual Action Plan was also modified.  All original NSP funds have been expended.  Details of the progress of these programs can be viewed in .pdf format in the City’s Quarterly Progress Reports.


Free viewers are required for some of the attached documents.
They can be downloaded by clicking on the icons below.