A Fire Department is Born:

In 1942, a large fire broke out in what was Riley's Bar, located just east of 8th Street (Dysart Road) along Western Avenue, 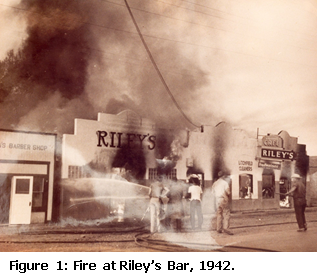 near the location of where Michelle's Bridal & Rentals is located today (Figure 1).  With no official, organized fire department, citizens rolled up their sleeves and worked together to extinguish the fire before it spread to adjacent businesses in what was once Avondale's small and modest downtown.  Soon thereafter, the community leaders realized that Avondale had grown to the point where incorporation was necessary and decided to incorporate in December of 1946.  By July 22 of 1947, the Avondale Fire Department was formed by an Ordinance of the City Council.  The volunteer department was to serve the more than 2000 residents that called Avondale home by the late 1940's. 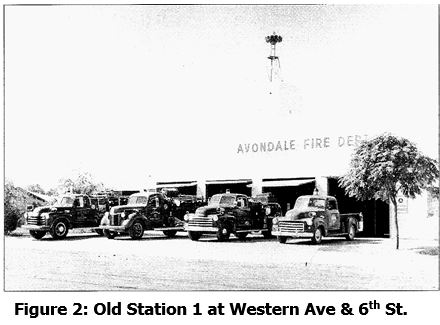 To house the fire trucks, equipment, and firefighters, the city constructed Station One (1), located at the southwest corner of Western Avenue and 6th Street (Figure 2).  The old station faced east and  was two stories tall with four bays for fire trucks and equipment.  To keep costs down, Chief Mabis enlisted prisoners from the nearby City jail to help with construction.  Volunteer firefighters were called into action via a civil service siren located behind the fire station.  One of the first fire engines acquired by the City was a 1950 Chevy.  Old Engine One is undergoing restoration thanks to some generous assistance from Universal Technical Institute (UTI), which has a campus in Avondale.  In a joint project undertaken by the Avondale Professional Firefighters Association and UTI, the restoration is still a work in progress. 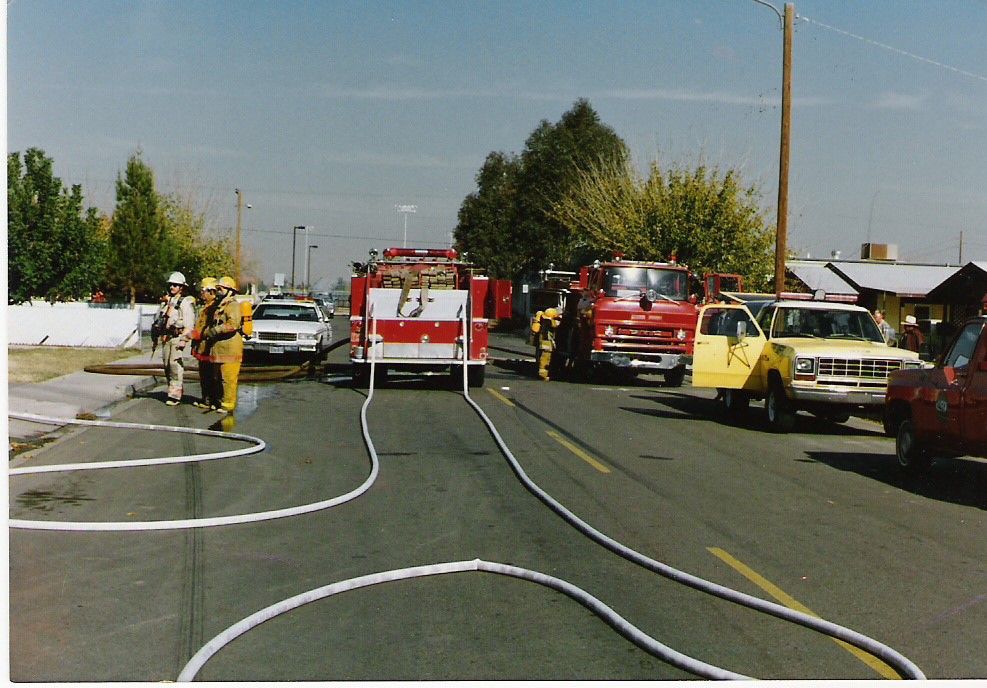 the 1980's. Avondale's first fire station was approaching 35 years old and it's age was beginning to show.  An unstable second floor was deemed unsafe and the City began construction of a new, more modern station.  By 1985, Fire Station One (1) was completed at its current location on 101 S. 5th Street.  Tradition is important in the fire service, and the old civil service siren behind the old station was spared and mounted at the new one.  Although still working condition, it is no longer in use since modern radio dispatch methods took its place long ago.  Emergency Medical Service has long been a critical service component of the modern fire department.  In 1990, Avondale began hiring and/or training personnel to be paramedics.  By 1992, Avondale total of five firefighter-paramedics on staff. 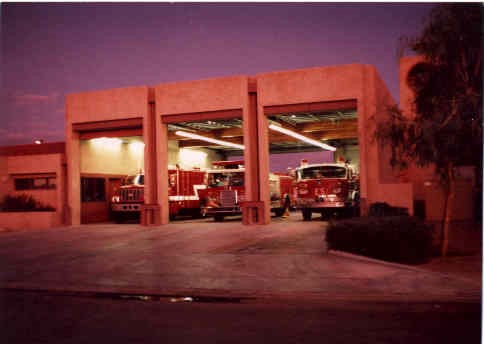 In 1995, the Avondale Fire Department opted to begin training some of its members in the field of Technical Rescue.  Technical Rescue Team (TRT) technicians have special training that enable them to respond to emergency situations that require specialized tools, tactics, and considerations.  These incidents include swift water rescue, high angle rescue, confined space rescue, tree rescue, and structural collapse incidents.  Today, Station 173 houses the TRT team and its equipment.

By the late 1990's, Avondale's population had grown close to 36,000 and a second fire station was needed on the city's northeast side to reduce response times.  Station 172 was opened in 1999 and built to serve both as a fire station as well as provide offices for the Fire Department's Administrative staff.  In 19999, the fire department sent the first Avondale fire recruits to participate in the Phoenix Fire Department Academy.  Prior to 1999, recruits were trained either in-house or in fire service programs offered through local community colleges.

The new millennium has brought explosive growth in the city's population, having more than doubled in the last ten years.  With the change in population also came a change in name.  To better represent the services provided by the fire department, Avondale Fire Department changed its name to Avondale Fire-Rescue in 2004.  The city also opened Station 173 in 2005 to serve the citizens in the southeast portion of Avondale. 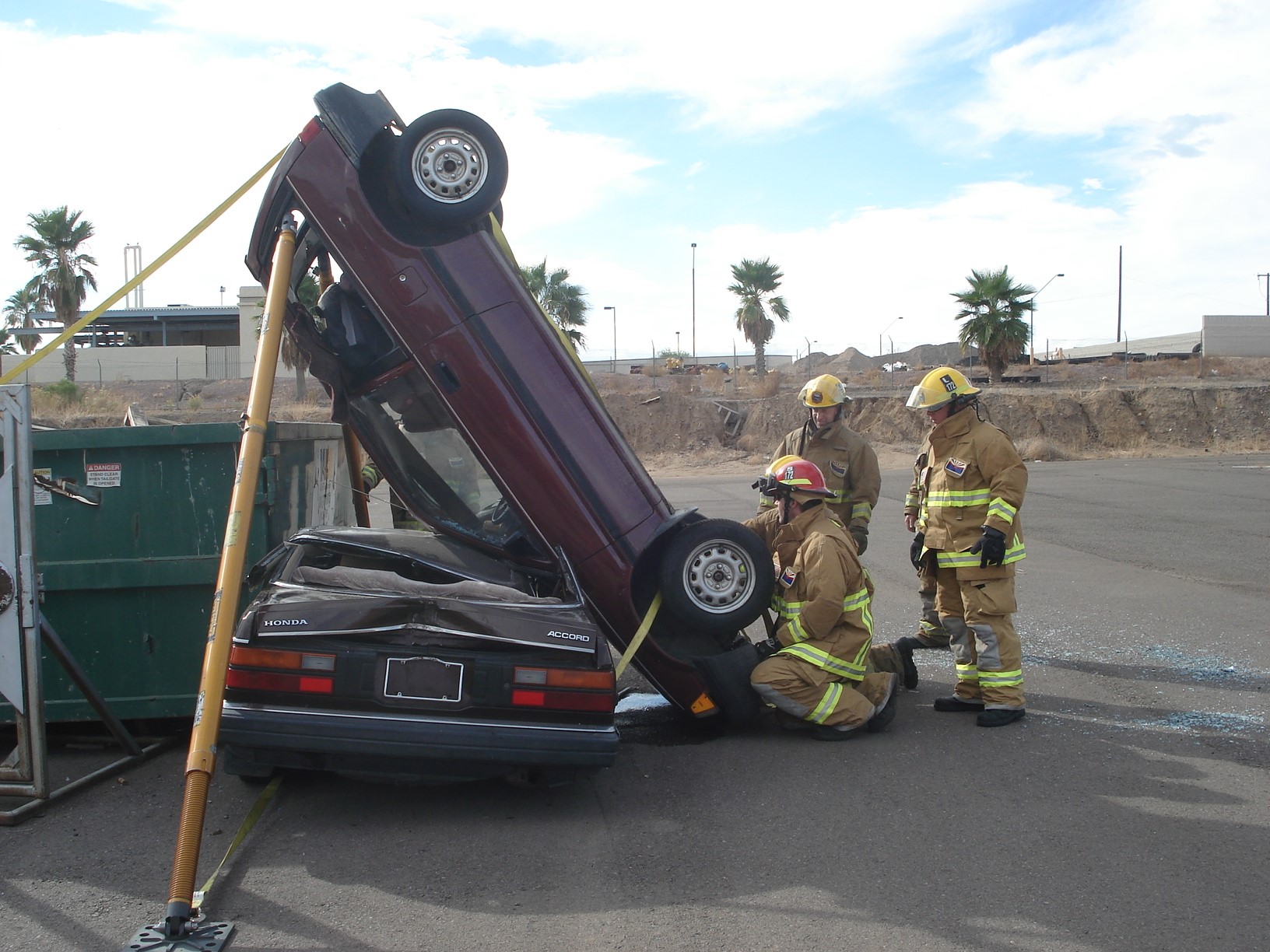 Avondale Fire-Rescue took several significant steps to meet the department's future training needs.  The first was a joint project with the Goodyear Fire Department to create a training facility that could be used by local departments.  In 2006, "The Pit", as it is affectionately known, was constructed adjacent to the City of Avondale's Municipal Operations Center at 4th Street and Lower Buckeye Road.  Although relatively small in size, it has provided a much needed training ground to fill the growing training demands of fire departments and Community/State fire service training programs.  Avondale also entered into an intergovernmental agreement with the cities of Glendale, Peoria, and Surprise to be a partner in the construction of the Glendale Regional Public Safety Training Center (GRPSTC).  Avondale Fire-Rescue had five of its newest members complete GRPSTC's first fire academy when it opened in 2007.  The state of the art facility promises to serve the department's training needs well into the future. 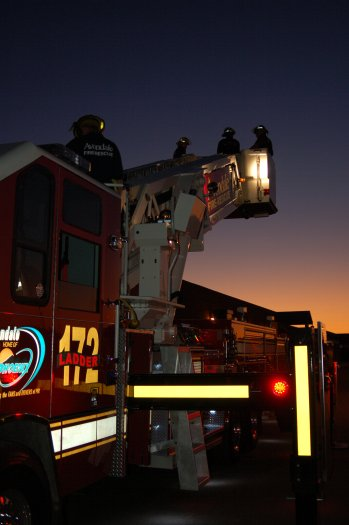 In 2008, for the first time in history, Avondale Fire-rescue placed an aerial apparatus into service.  The 42-ton aerial platform was built by Pierce Manufacturing and began running calls out of Station 172.  A flurry of training preceded the introduction as personnel had to become proficient in ladder company operations which included vehicle extrication, ventilation, and forcible entry.

In an effort to provide better service to Avondale's citizens in the northwest corner if the city, efforts to construct Station 174 as part of the Northwest Public Safety Facility were initiated despite a recessive economy in 2010.  Today, Station 174 is fully operational.

Free viewers are required for some of the attached documents.
They can be downloaded by clicking on the icons below.